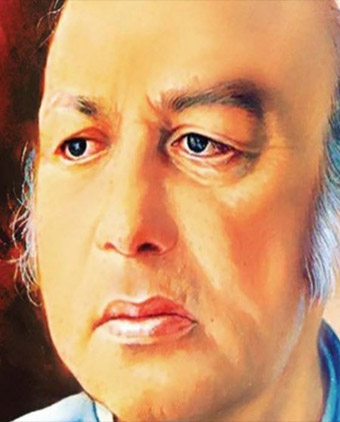 Habib Jalib (Urdu: حبیب جالب) was a Pakistani revolutionary poet, left-wing activist and politician who opposed martial law,authoritarianism and state oppression.Pakistan's renowned and celebrated poet Faiz Ahmed Faiz paid tributes to him by saying that he was truly the poet of the masses.[1]

Habib Jalib was born as Habib Ahmad on 24 March 1928 in a village near Hoshiarpur, British India. He migrated to Pakistan after the partition of India and worked as a proofreader for Daily Imroze of Karachi. He was a progressive writer and soon started to grab the audience with his enthusiastic recitation of poetry. He wrote in plain language, adopted a simple style and addressed common people and issues. But the conviction behind his words, the music of his voice and his emotional energy coupled with the sensitivity of the socio-political context is what stirred the audience.

Criticizing those who supported Ayub Khan's regime, he wrote:

There is smoke of teargas in the air

and the bullets are raining all around

How can I praise thee

the night of the period of shortsightedness

Jalib could never reconcile with the dictatorship of Ayub Khan. So when Ayub enforced his tailor-made constitution in the country in 1962, which a former prime minister Chaudhry Muhammad Ali likened to the Clock Tower of Lyallpur, Jalib wrote the following poem:

Jalib was banned from official media but he remained undeterred. He rather started a tirade against the tyranny with more resolution. It reached its zenith when Fatima Jinnahdecided to contest elections against Ayub Khan. All democratic forces rallied around her and at her election meetings, Jalib used to recite his fiery poems in front of an emotionally charged crowd. His most popular poem at that time was:

The paradise is under the feet of the mother. So come into her fold.

In another incident which has become a part of the resistance folklore of the country, the Governor of West Pakistan, the Nawab of Kalabagh, invited filmstar Neelo to dance in front of Shah Reza Pahlavi of Iran. She refused and as a consequence the police was sent to force and bring her, which led to her attempting to commit suicide. This incident inspired a poem by Jalib, which was later included by Neelo's husband Riaz Shahid in the film Zarqa (1969). The poem was titled Raqs-e-Zanjeer (The dance of the chains):

You are not aware of the protocol of a king's court. Sometimes one has to dance (before them) with the chains on oneself.

His magic has not been broken

His blood became a slogan

It has been proved,that he ruled his people's hearts

During General Zia-ul-Haq's dictatorship, Jalib wrote a poem on Zia,[9] in which he asked how he could write darkness as Zia ( Zia literally means light in Urdu).

Darkness as light, Hot desert wind as a morning breeze

How can I write a human as God?

After General Zia-ul-Haq's death in 1988, Benazir Bhutto came to power and released Habib Jalib.[citation needed] Disappointed at the state of the nation, when asked if he felt any change after democracy, he said:

The status of the poor is still the same

the days of the ministers have indeed changed

while Benazirs (i.e the poor) of the country walk without shoes

Habib Jalib died on 13 March 1993. His family refused the offer of the government to pay for his funeral expenses.[citation needed] Qateel Shifai expressed his sorrow and grief in these words:

He mainly wrote about the evils brought upon society by corruption and inequity. An example is:

Some poems in his own voice

Laal band remastered and remixed the revolutionary poem "Dastoor" in Habib Jalib's voice[11] and included it in their 2009 album Umeed-e-Sahar.

On 23 March 2009, President of Pakistan has given the highest civil award (posthumously) to the legendary poet, which was received by his daughter.

Solo artist Umair Salim composed his poem "Dastoor" in a musical track to tribute the poet on his death anniversary in 2009, followed by a music video portraying Habib Jalib's life.

But as nation remembers this great poet, Pakistani channels have aired a story that Habib Jalib's wife is fighting with illness and she is deprived of the money President Asif Ali Zardari and Prime Minister have announced for her.