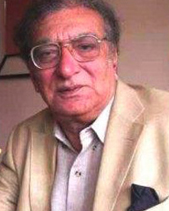 Ahmed Faraz (Urdu: احمد فراز‎, born Syed Ahmed Shah (Urdu: سید احمد شاہ‎) on 12 January 1931[1] in Kohat,[2] [3] died 25 August 2008) was a Pakistani Urdu poet. He was acclaimed as one of the best modern Urdu poets of the last century. 'Faraz' is his pen name, (in Urdu takhalus). He died in Islamabad on 25 August 2008.[4][5] He was awarded Hilal-e-Imtiaz, Sitara-i-Imtiaz and after his death Hilal-e-Pakistan by the Government of Pakistan.

Ahmad Faraz was born in Kohat, (then British India) to Syed Muhammad Shah Barq. His brother is Syed Masood Kausar. He moved to Peshawar with his family. He studied in famous Edwards College, Peshawar and received Masters in Urdu and Persian fromPeshawar University.[6]

Faraz has been compared with Faiz Ahmad Faiz,[6] holds a unique position as one of the best poets of current times, with a fine but simple style of writing. Even common people can easily understand his poetry.

In an interview with Rediff of BBC News, he recalls how his father, once bought clothes for him on Eid. He didn't like the clothes meant for him, but preferred the ones meant for his elder brother. This led him to write his first couplet:

(He brought clothes for everybody from the 'sale')

(For me, he brought a blanket of a prisoner from jail)

Faraz was arrested for writing poems that criticised military rulers in Pakistan during the Zia-ul-Haq era. Following that arrest, he went into a self-imposed exile.[5] He stayed for 6 years in Britain, Canada and Europe before returning to Pakistan, where he was initially appointed Chairman, Pakistan Academy of Letters and later chairperson of theIslamabad-based National Book Foundation for several years. He has been awarded with numerous national and international awards. In 2006, he returned the Hilal-e-Imtiazaward he was given in 2004.[6]

He mentioned his current writings and said: "I now only write when I am forced to, from the inside."[citation needed] Maintaining a tradition established by his mentor, the revolutionary Faiz Ahmad Faiz, he wrote some of his best poetry during the days when he was in exile. Famous among the 'poetry of resistance' has been "Mahasara". Faraz was also mentioned by actor Shahzada Ghaffar in the Pothwari/Mirpuri telefilm "Khai Aye O".

Faraz died of kidney failure in a local Islamabad hospital on 25 August 2008. His funeral was held on the evening of 26th, by many admirers and government officials at H-8 Graveyard, Islamabad, Pakistan.[10][11]

A sample of his poetry is:

Dream are heart, nor eyes nor breath

Which shattered, will scatter

Die with the death of the body

Another poetic translation of the above

Dreams are heart, nor eyes nor a breath

Which shatter and then they scatter,

Die they all, with end being nigh 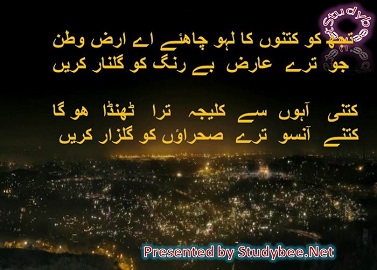